All Categories ​>​ ​Integrations ​ > ​ ​Greenhouse ​>​ What do Drafted candidates look like in Greenhouse? 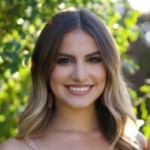 Updated 1 month ago by Aubrie Przybysz